Morgan, McCullum, Buttler can be in trouble for mocking Indian fans 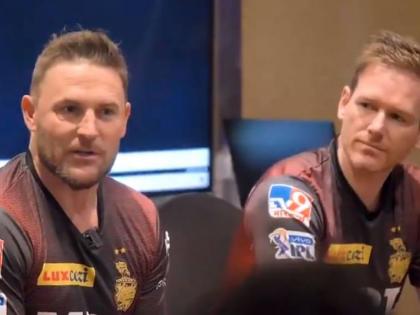 Kolkata Knight Rider skipper Eoin Morgan and coach Brendon McCullum, and Rajasthan Royals Jos Buttler, could face trouble after their 2018 social media exchange got viral where they were mocking the Indian accent.

“Screenshots have also been shared of a message by Buttler in which he says ‘I always reply sir no1 else like me like you like me’ and, separately, Morgan includes Buttler in a message which says, ‘Sir you’re my favourite batsman’,” claimed a report.

“Although there are questions over the precise context of the tweets, they were written at a time when Buttler and Morgan have established England players and have caused offense on social media,” a report in England’s Telegraph said about the two English players’ Twitter comments.

Reacting to the media exchange of these players KKR CEO Venky Mysore said that the team has ‘zero tolerance’policy for such behaviour.

“We don’t know enough about it to comment at this time. Let’s wait for the process to be completed to get all the facts before we jump to any conclusions. Just to reiterate, the Knight Riders organization has ‘zero tolerance for any sort of discrimination,” Mysore told Cricbuzz.

All of these are happening after England paceman Ollie Robinson got suspended from playing international after his decade-long ‘sexist and racist’ tweet gone viral.