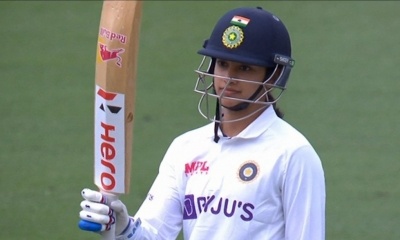 India women star batter Smriti Mandhana said that she had never thought that she would be able to play a pink-ball Test.

Smriti scored a terrific ton vs Australia last month when India played their first day-night Test. Rain played spoilsport on two days, but the Mithali Raj-led side was able to put Australia under pressure in that drawn game.

“Test matches are the best. I would not mind any Tests match whether it be in the day or night, great experience playing in the challenging conditions in England and Australia. Best thing was not to wake up early, jokes aside, we didn’t get much time to get used to it we got only two days. I never thought that I would get a chance to play a Day and Night Test,” Mandhana said during a Clubhouse session on 10 years of Red Bull Campus Cricket during which its first ever women’s edition was announced.

“It was a dream come true to play day and night test match as an Indian player. We do not get much opportunity to be 80 not out overnight so it was a sleepless night for, and I had to restart the other day so it was a unique but a great experience,” she added.

Smriti Mandhana was player of the match for her maiden Test century and handy contribution for India. She is currently playing in Big Bash League for Brisbane Heat.