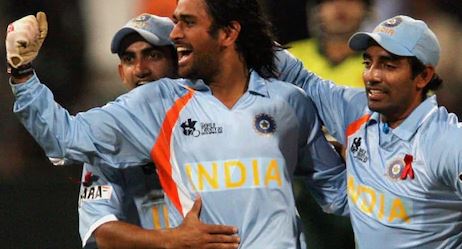 On this day 14 years back India kept their winning streak by defeating Pakistan in a bowl out, in the 2007 T20 World Cup where, MS Dhoni led side emerged as the winners.

“#OnThisDay in 2007, India v Pakistan at #WT20 ended with scores level, and India won a bowl-out 3-0 in a thrilling tie in Durban!” tweeted ICC 4 years back.

The inaugural T20 World Cup has fond memories for Indian fans and Indian cricket whether it’s Yuvraj Singh six sixes in an over or beating Pakistan two times in a tournament.

Talking about the match Pakistan won the toss and restricted India to 141/9 runs at the end of 20 overs. Later the Indian bowlers kept the job hard for Pakistan that resulted in a tie. Misbah-ul-Haq top scored for Pakistan with 53 runs, but he was dismissed in the final over and the match ended in a tie.

Pakistan have missed all the bowl out and India got three-in-three.

Leading India for the first time, Dhoni eventually took the side to the T20 World Cup triumph in 2007.