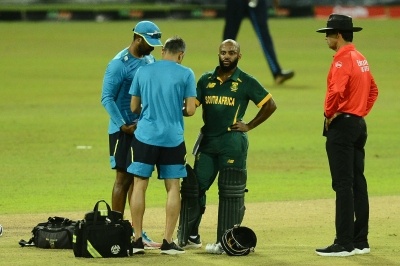 South Africa limited-overs captain Temba Bavuma has been ruled out of the ongoing Sri Lanka tour due to fracture in right thumb. In his absence the left-arm spinner Keshav Maharaj will lead the side in ODIs for the remaining matches.

However the panel is yet to decide the captain for the T20Is.

“Scans have indicated a fracture and Bavuma will return to South Africa as soon as possible to consult a specialist. The timelines for return to play will be defined subsequent to that,” said Cricket South Africa (CSA) in a statement on Friday.

Bavuma sustained injury during the first ODI against Sri Lanka on Thursday.

Sri Lanka lead the three-match series 1-0. The second ODI match is scheduled for Saturday followed by the final game on Tuesday.