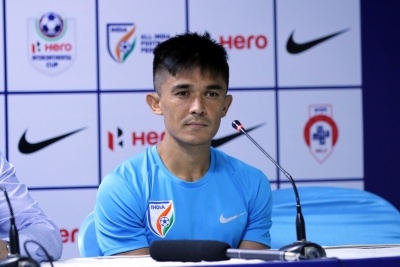 India skipper Sunil Chhetri who played a vital role in nation’s victory in SAFF Championships win has credicted the young team for the victory.

The 37-year-old scored five out of India’s eight goals in the tournament and surpassed Pele with his 80th international goal. He has equalled Lionel Messi’s all-time leading goal-scorer in international football.

“We made it special as we were not so good in the first two games. It was tough from there to come up and play the way we did,” added Chhetri after his third triumph in the SAFF Championship as a player. Chhetri, who has won the regional tournament in 2011 and 2015 also, was referring to the draws against Bangladesh (1-1) and Sri Lanka (0-0) in the first two matches which had attracted criticism.

“Didn’t start like we should have, but ended exactly how we wanted to. Proud of this bunch and the way we got things on track,” he later said in a tweet.

Chhetri, who scored five out of India’s eight goals, was all praise of the other two Indian goal getters on Saturday — Suresh Singh and Sahal Abdul Samad.

“I enjoyed watching that, Sahal. Suresh, of all the things you copy from me, this is up there. Make it a habit,” said the captain.

Meanwhile, Goal keeper Gurpreet Singh Sandhu has posted a picture with the skipper and wrote “Some winning moments are best enjoyed saying nothing.”