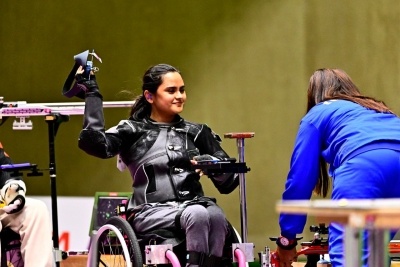 Shooter Avani Lekhra said that a good, friendly and supportive environment helped her to be ready for the Paralympics. Avani created history by winning two medals at the Paralympics, becoming the first woman to do so.

The 19-year-old Avani won the bronze medal in the 50m rifle 3 position SH1 event at the Tokyo Paralympics. Earlier, she had won the gold medal in the 10m air rifle standing SH1 event. Avani is now the first woman and second Indian overall to claim multiple medals in the same edition of the Paralympics.

“I have a very wonderful team. My coaches JP Nautiyal sir, Subhash Rana sir, Suma mam, my support staff here, all the team members and other athletes. We have a very good environment, friendly and very supportive. So, that helps a lot in readying a good mindset,” said Avani in a virtual interaction organised by Eurosport and the Paralympic Committee of India (PCI).

“In between changeovers when I was doing something wrong or some problem occurred, Suma mam motivated me a lot and has worked hard with me. So, it is like a team effort and I am very thankful that I have got a wonderful team like this,” added Avani.

“From the starting it was not that good because that’s what finals do to you, you become nervous. I had never won a medal in 3P. This is my first international medal in 3P. So, I was more nervous. But I just kept my focus on the shots, like the last match when I was focusing on one shot at a time. And it just happened,” explained Avani.

With her last event of the Paralympics, mixed 50m rifle prone event scheduled for Sunday, Avani is now fully concentrated on giving her best. “I just want to give my 100% and focus on the next event. I don’t want to keep this in my heart that I wish I had done better if there was more time. All the celebrations right now can be kept aside as I am focusing on the next match.”