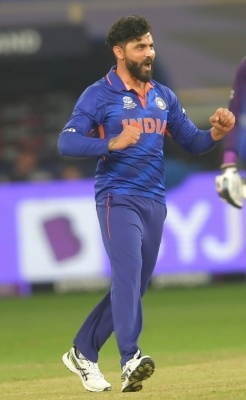 After a memorable spell against Scotland, India spinner Ravindra Jadeja has revealed about his mantra for success following his figures of 3/15 on Friday.

Jadeja said that bowling in right areas was the key for the bowlers in getting Scotland out for just 85. He added that he was lookig for the wickets in the middle-overs.

“We were looking to bowl in good areas because the oddball was gripping, turning, and spinning. The key was to bowl in the right areas as a spinner or a fast bowler. So, we were bowling in the good areas and rest, the wicket was doing the job,” Jadeja said in the post-match press conference.

“My role was the same. Look to take wickets in middle overs and whenever I got an opportunity, try and bowl like how I used to bowl. The plan was simple. Ther’ wasn’t much of a big change just because we were playing Scotland. It was a simple, basic plan,” added Jadeja, who was adjudged ‘Player of the Match’ for his figures of 3/15 in four overs.

Jadeja mentioned that there is no panic in the dressing room after India lost to Pakistan and New Zealand in their first two matches of the tournament.

“There wasn’t much panic in the dressing room. All were normal because, in the T20s, one or two matches do not go our way. Here, winning the toss becomes very important as because of dew, the whole game changes. If a team that bats first gets a chance to bat second, then their way of batting completely changes. In my opinion, the dew factor is very big, due to which batting first and batting second teams are looking like playing games poles apart. All these changes in the game are happening due to dew.”

India cruised to an eight-wicket victory over Scotland with 81 balls to spare.