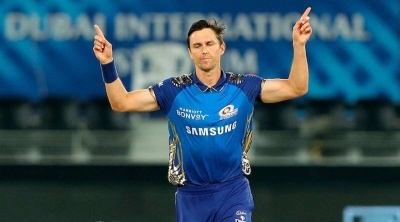 New Zealand pacer Trent Boult stated that he is excited to take the field for Mumbai Indians in the UAE-leg of the season.

In the first half of IPL 2021, Boult took eight wickets in seven matches at an economy rate of 8.46.

“I’ve enjoyed a couple of months of’. I’m really excited to get back here’ It’s obviously pretty hot. Six days in quarantine has been ticked off. Look forward to getting involved,” said Boult in a video posted by Mumbai Indians on Sunday”

“There are obviously some good memories. Coming back through to the same hotel, same room. Amazing team room and obviously, the facilities are exactly the same. But there has been some good time. So hopefully, we can refresh the memory and pick up where we left off,” added Boult.

“Different circumstances, with half the tournament played. So I’m sure all the franchises are well prepared and looking forward to getting into it. But the beaut’ is, we’ve had some success here. So it’s about going back and reflecting on that and hopefully continuing what we know best.”

Five-time IPL champion Mumbai Indians were at fourth spot when the season was paused citing COVID cases in the camp. They will be opening their second leg against Chennai Super Kings on September 19 in Dubai.