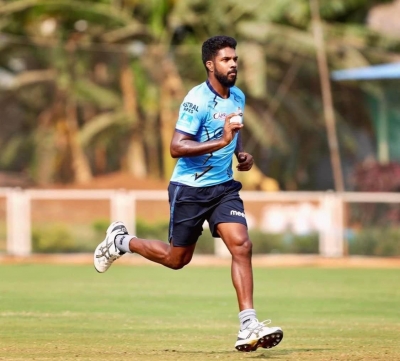 India fast bowler Varun Aaron is not worried about competitions but he is hopeful of India comeback, saying he is competing with himself and can play for any team at his best.

The Indian cricket team currently has a plethora of options in the fast bowling department and have serious competition. So, making a comeback for Aaron, who last played for India in 2015 and has suffered many injuries since then, won’t be easy. However, the Jharkhand-born cricketer is optimistic about his chances.

“At the end of the day, the only person who I am competing with is myself. When I broke into the Indian team, the great bowlers like Zaheer Khan, Praveen Kumar, Munaf Patel, Ashish Nehra were playing at that time. If I thought about the competition back then, I would have never made into the team,” Varun told a media outlet

“So similarly, my focus has always been myself, and I know that I, at my best, would make myself with the team,” he added.

There was a time when most of the budding cricketers wanted to become batters but things have changed drastically in the last few years. Nowadays, youngsters are keen to take up fast bowling.

Aaron, who himself was part of the MRF Pace Academy in Chennai at the age of 15, and has seen Indian cricket closely for a very long time now, feels better athleticism and improved infrastructure has led to the transformation.

“I feel it’s great. I feel India is evolving as a sporting country. People have started taking up a lot more sports than just cricket. So with that, you get better trained athletes. And, fast bowling is all about being athletic, it’s all about having stamina, being strong and having speed,” the pacer said.

“Before, guys used to play like cricket all day, they just played a little football but now kids are being trained in school. There are programs in place and also in India at the moment, we’ve got a great setup and structure to spot talent at an early age and invest in them.