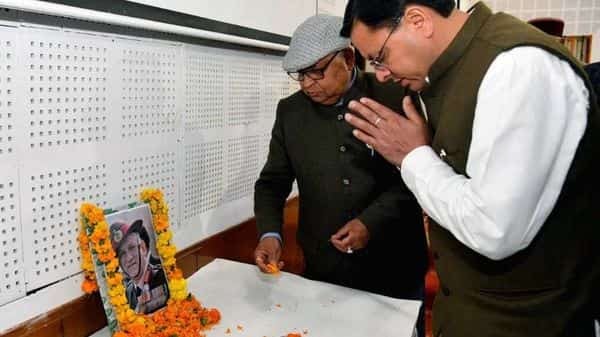 The Uttarakhand Government declared a three-day state mourning from December 9 to 12 over the death of CDS Gen Bipin Rawat. Rajya Sabha MP Subramanian Swamy sought a probe by a senior Supreme Court Judge into the crash.

General Bipin Laxman Singh Rawat was born in Pauri, modern-day Uttarakhand, on 16 March 1958. He belonged to the Saina village in the district, growing up in a family that had been serving in the Indian Army for multiple generations. His father, Laxman Singh Rawat was from Sainj village of the Pauri Garhwal district and rose to the rank of lieutenant-general.

Bipin Rawat, too, graduated from the National Defence Academy in Khadakwasla and the Indian Military Academy in Dehradun, where he was awarded the ‘Sword of Honour’. He would, of course, later go on to become the much-venerated general of the Indian Army that he was known as, serving in various divisions of the armed forces across multiple postings before being promoted to the office of the Chief of Army Staff (COAS) and finally, India’s first Chief of Defence Staff (CDS) – a post he served diligently till the time of his tragic death.

In his condolence message issued here, Dhami prayed for peace to the departed souls. Terming the sudden death of Rawat as an irreparable loss to the country, Dhami said he had made great contribution to the country’s security.

“The country will always remember the courageous decisions taken by him for the security of the borders and the contribution made by him to keep the morale of the armed forces always high,” he said.