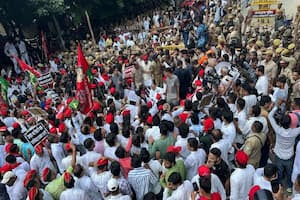 Monsoon session is starting in the Uttar Pradesh Legislative Assembly from today, in such a situation the political temperature of the state has increased. On one hand, while the ruling party is talking about discussion inside the house, on the other hand, the opposition is on the road today on issues like law and order, rising inflation and unemployment.

The padyatra being taken out against the Yogi government led by Samajwadi Party chief Akhilesh Yadav was stopped. The police allege that the SP did not follow the route during the march. At the same time, Akhilesh Yadav has gone to the meeting on a dharna after being stopped by the police.

The SP MLAs expressed their displeasure over the attitude of the UP Police. At the same time, Chief Minister Yogi Adityanath has targeted this foot march of SP. Due to the performance of the SP before the monsoon session of the Assembly, security has been increased around the Vidhan Bhavan. Barricading has been installed on all the roads. All the policemen are deployed since morning. All arrangements have been made to ensure that the traffic system continues smoothly during the protest.

Commenting on the Samajwadi Party’s foot march, Uttar Pradesh Chief Minister Yogi Adityanath said that there is no harm in speaking democratically to any party and individual…if they (Samajwadi Party) would have sought permission, whatever The administration would have provided them with a simpler route. He said that I think it can only be called a figment of the imagination to expect the Samajwadi Party to follow any rule or any etiquette.