UP official’s holds survey of historic Islamic seminary in Lucknow 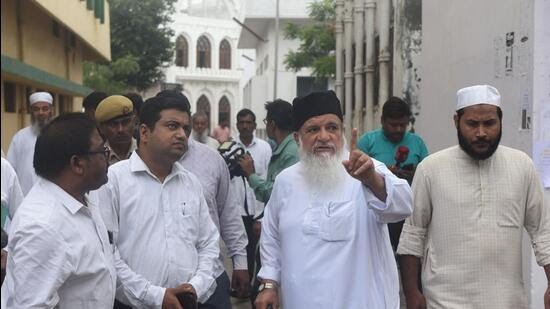 Three government representatives from Uttar Pradesh visited the Darul Uloom Nadwatul Ulama, an Islamic seminary in Lucknow, to learn more about its infrastructure, funding sources, and teacher-student ratio. After their visit, they declared that the nearly 124-year-old institution was “unrecognised” by the state board of madrasa education.

Sone Kumar, the district minority welfare officer who was in the team, said: “This madrasa is not recognised by the UPBME (Uttar Pradesh Board of Madrasa Education). We were at the seminary to collect certain details. Our job will be over once we submit the report to the government. The purpose of the survey is to upgrade and modernise the education system.”

However, Abdul Aziz Nadvi, vice-principal of the madrasa, told reporters: “We are recognised by several bodies and we have been functioning since 1898 in a transparent manner with the support of donations from various known sources. We are an open book that anybody can read. We don’t have any secret and would love to share whatever the government asks for. We are here to cooperate with the government or anybody else who shows interest in us.”

Nadvi added: “We impart education from the school to the postgraduation level in science, including computer science, as well as arts. Besides Arabic and Urdu, our medium of education is in English since 2018. We specialise in theology….”

The Yogi Adityanath administration had ordered a survey of the state’s madrasas last month. The minority protection agency thereafter gave the order to survey the unaided madrasas.

The poll is an example of “highhandedness of the state administration that seeks to look for a pretext to harass Islamic educational institutions,” according to the All India Muslim Personal Law Board and the Jamiat Ulema-e-Hind.

The government has already cut off the funding for numerous assisted madrasas, according to a minority welfare department official.