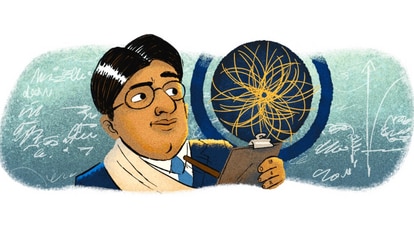 The Google Doodle on June 4 celebrated Indian mathematician and physicist Satyendra Nath Bose. It was on this day in 1924 that he sent his quantum formulations to the legendary Albert Einstein, who immediately recognised their significance.

The formulations, documented in a paper titled Planck’s Law and the Hypothesis of Light Quanta, were applied by Einstein to a range of phenomena.

Today’s Google Doodle portrays a cartoon of Bose along with a clipboard where he can be seen writing intently. The background of the illustration features a blackboard with formulas and equations written on it. The centre of the image is occupied by the symbol of an atom, which is also the gateway to quantum physics. Google has also published a blog post where it has dedicated a small description of the achievements of Satyendra Nath Bose.

Satyendra Nath Bose was also a physicist, who specialized in theoretical physics. He is renowned for developing the foundation for Bose statistics and the theory of the Bose condensate. In 1954, he was awarded India’s second-highest civilian award, the Padma Vibhushan by the Indian Government.

He was also an adviser to the Council of Scientific and Industrial Research, and later became a Fellow of the Royal Society.

A polymath, he was interested in many fields, which includes physics, mathematics, chemistry, biology, mineralogy, philosophy, arts, literature, and music. He served on many research and development committees in sovereign India.

Since the early stages of life, Bose felt an inclination toward solving arithmetic problems every day given to him by his father, who was an accountant. At an age of 15 only, he got admission in at Calcutta’s Presidency College, where he studied Bachelor of Science degree.

Even, the famous Bengali polymath, Rabindranath Tagore wrote a dedicated book on science, Visva–Parichay, in honor of Satyendra Nath Bose in 1937.