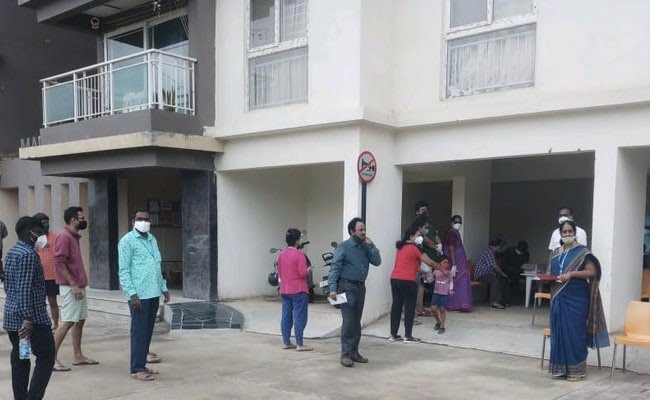 Stunned after 10 patients were found corona infected in an apartment complex in Bengaluru. In a statement, Bangalore Municipal Corporation Commissioner N Manjunath Prasad said that ten cases of infection occurred between 15 February and 22 February at SJR Watermark Apartments. There are 9 blocks in this campus in which around 1,500 people live. According to the official, six cases have been declared as containment zones after infection cases have come to light.

The area was declared a containment zone after such a large number of people were found to be corona infected. According to officials, this boom in the cases of Covid-19 in the area has been seen after the holding of two anniversary parties. A massive corona investigation campaign was launched after about two dozen new cases were reported in the area within two days. After which the whole area was ordered to be sealed.

An apartment in Bengaluru city of Karnataka was so struck by the corona that 103 positive cases were found here, not one or two. As soon as this news was received, the entire apartment was stirred, after which it was declared as a Containment Zone. Only those people who have a negative certificate of Corona will be allowed to exit from here. According to the news, all 103 positive people attended a party in the apartment.

1500 people live in apartments,
District officials said a party was recently held at the Residential Society SNN Raj Lakeview. Only after this number of corona cases was recorded. 103 positive people include drivers, meds and cooks. There are 1500 people living in 435 flats of the apartment. According to administrative officials, around 500 people gathered at the February 6 party.

Whereas in the end of last year, more than one lakh cases were being seen daily at the end of last year, on the last days it showed control and it reached less than 10 thousand cases in a day. But for the past few days, it is seeing a boom once again, which has increased everyone’s concerns.