Clashes Break Out in WB BJP’s March to Nabanna; Cops Use Tear Gas 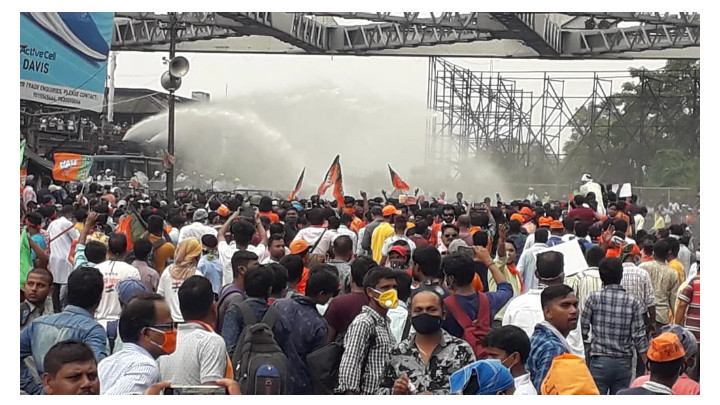 Clashes broke out between the West Bengal Police and BJP workers during the saffron party’s march towards state secretariat, Nabanna, on Thursday, 8 OcOctober, to protest against the alleged killing of its workers.

The BJP President Jagat Prakash Nadda, in a series of tweets on the Nabanna incident, said: “Mamata Banerjee’s karyakartas and the Gov machinery led by her have unleashed brute force upon BJP karyakartas in an attempt to prevent them from holding protests against her tyrannical & bloodied misrule in West Bengal. Such misuse of power is totally unacceptable & condemnable.”

The march, “Nabanna Chalo (let’s go to Nabanna)” came days after a BJP member was shot in Barrackpore, around 20 km from Kolkata.

Trouble started around 12.30 pm after a police vehicle belonging to the armed police was allegedly attacked at Hastings area and the protestors tried to vandalise it.

Similar incidents of violence were reported from GT Road, Howrah Maidan and Santragachhi, where the protestors reportedly hurled bombs and burnt tyres out of anger and tried to break police barricades. The forces retaliated with lathi charge and tear gas.