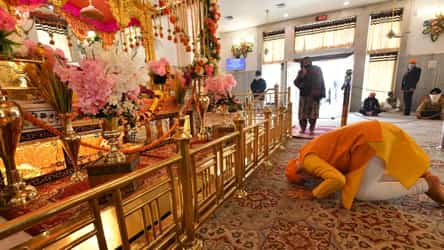 Prime Minister Narendra Modi reached Rakabganj Sahib Gurdwara in Delhi. Here, he bowed to Guru Tegh Bahadur for the supreme sacrifice. The Sikh Samagam has been going on for the last 25 days in this gurudwara located behind Raisina Hills.

According to officials, no police barricades were conducted for the PM’s visit. PM Modi visited Rakabganj Gurudwara at a time when thousands of farmers of Punjab in Delhi are agitating against the new agricultural laws. They now have the support of farmer organizations across the country.

Today is the martyr day of Guru Tegh Bahadur. The PM’s arrival at Gurudwara Rakab Ganj is considered to be very important amidst the farmers’ agitation on the border of Delhi, as Punjab-Haryana farmers have an active role in the movement. It is said that during the arrival of Gurdwara Rakabganj at Prime Minister Modi, neither any police arrangement nor traffic blockers were installed for the common man.

Two days ago, Prime Minister Narendra Modi while addressing the farmers in Madhya Pradesh said that “I assure all farmers that neither the minimum support price will be abolished nor the agricultural mandis will be abolished”. He also accused the opposition parties of instigating the farmers. During this, Modi also mentioned how his government has benefited the farmers by increasing the MSP of crops.

Farmers across the country have been demonstrating at the Singhu border for the last 25 days against the three farm law.

Farmers across the country will celebrate ‘Tribute Day’ in memory of those who lost their lives in the ongoing agitation against new agricultural laws. Prayer meetings will be held during this time.

Farmers of Rajasthan, Gujarat and Haryana have been stuck on the Haryana-Rajasthan border for the last 7 days. Last week, the Rewari police stopped them from heading towards Delhi. Thousands of other farmers have also been prevented from entering the Delhi border.