A mob also burnt vehicles in the police station. 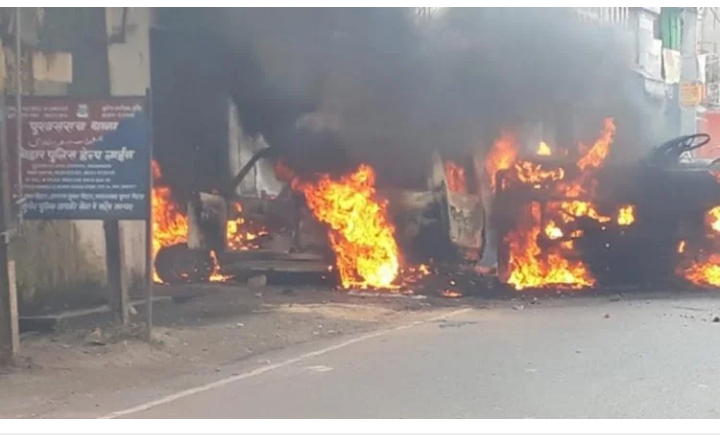 Three days after a person was killed during a police baton charge and firing by unidentified persons in Bihar’s Munger, the Election Commission of India (ECI) on Thursday ordered the immediate removal of Munger’s District Magistrate Rajesh Meena and Superintendent of Police Lipi Singh.

Rajesh Meena is district magistrate and Lipi Singh is SP of Munger. The EC statement said Munger will get a new DM and a superintendent of police on Thursday itself

Also, an inquiry has been ordered into the incident by Magadh Divisional Commissioner Asangba Chuba Ao. The inquiry has to be completed in the next seven days.

Alleging that no action was taken against the SP and other police personnel over the Monday night incident, the agitators allegedly torched muffasil and women police stations in the town.

They allegedly set police outposts at Purab Sarai and Basudeopur on fire, and ransacked the SP office and several other police stations and outposts.

A mob also burnt vehicles in the police station.

An officer posted in Vasudevpur OP said that around 150-200 people suddenly came and started pelting stones at the OP and then set it ablaze. “We somehow managed to save our lives,” he said.

The Bihar Police conducted a flag march in Munger on Thursday after a mob vandalised the office of Sub Divisional Officer (SDO) and Superintendent of Police (SP) while protesting against a man’s death during Durga idol immersion clashes on October 26.

A man was shot during the Durga idol immersion ceremony in Munger after clashes broke out due to the slow pace of the procession.

“Munger incident is under investigation. Clashes erupted due to the pace of idol immersion,” Jitendra Kumar, Additional Director General of Police, said.

Witnesses said that finding themselves outnumbered, the police personnel at all these stations escaped from the premises.

Tension is prevailing in the area after the incident and additional police has been deployed in the city.