Jitna Ram Manjhi joins NDA, entry could help the alliance in the expansion of Dalit voter’s base in the state 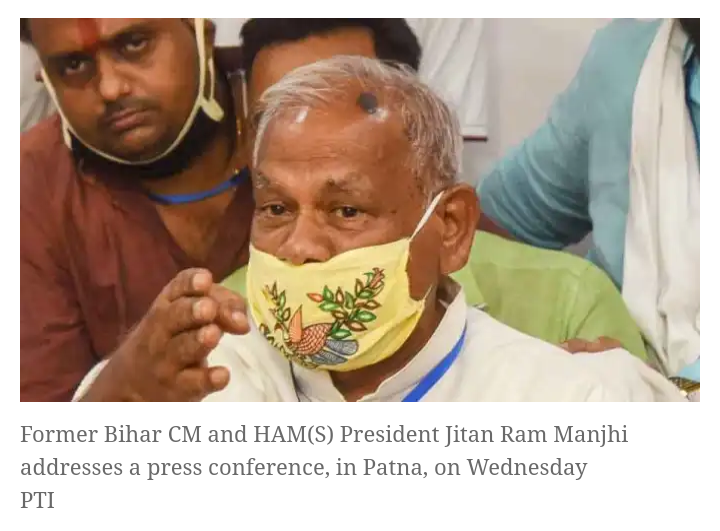 Less than a fortnight after he quit the RJD-led Opposition Grand Alliance in Bihar, former chief minister and Hindustani Awam Morcha (Secular) president Jitan Ram Manjhi on Wednesday announced that his party will be part of the NDA as an alliance partner of the JD(U) for the forthcoming Vidhan Sabha elections.

Manjhi said he left the Grand Alliance after his demand to constitute a coordination committee to steer the seat-sharing talks was not met. The former chief minister also said that he will not contest the Assembly polls. He is currently an MLA from Imamganj constituency in Gaya district.

HAMS spokesperson Danish Rizwan said, “Seats had never been an agenda for us. We are going with the NDA on the agenda of development. We will take ahead the stream of development launched by chief minister Nitish Kumar and Prime Minister Narendra Modi.”

A section in the JD(U) feels that Manjhi’s entry could help the NDA in the expansion of Dalit voter’s base in the state.

About 40 seats in the 243-member house are reserved for Dalits and they form over 16 per cent of the electorate.

Chirag Paswan, who has frequently targeted Nitish Kumar in the past months, has called a meeting of the LJP next week.

Mr Manjhi has a history of attacking the LJP leadership; the LJP believes that Nitish Kumar brought him in to queer the pitch for the Paswans.