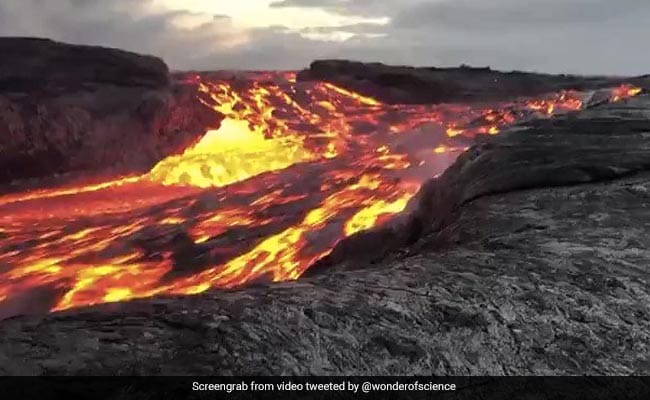 Viral Video: A fiery stream of lava flowing through a Hawaii volcano has been captured on video, and is going viral on social media. The video shows a “river of lava” flowing through Kilauea, one of the five volcanoes that form the island of Hawaii. The volcano is considered to be one of the most active in the region.

The viral video was shared by the Twitter page Wonder of Science and depicts the lava surging through the terrain, leaving black volcanic soil in its wake. The clip was posted with the caption, “Incredible close-up footage of a fast flowing river of lava rushing from Hawaii’s Kilauea volcano,” giving credit to Epic Lava Tours.

The video has garnered over 1.4 million views in a little over 24 hours, as well as nearly 30 thousand likes.

The internet was completely enamoured by the terrifying yet glorious sight. One user said, “The reason why I can’t be a volcanologist: I wanna stick my hands and face in the flowing lava river.”

“It pains me that I cannot ever touch lava…I just want to feel it,” another user rued.

Echoing a similar sentiment, a third comment read, “Damn it. it’s very unfortunate that lava looks so touchable when it so isn’t.”

“The most interesting use of drones seems to be the video footage of active volcanoes,” another user wrote.

The most recent and continuing eruption of the Kilauea volcano began in September 2021. According to the recent updates from the U.S. Geological Survey on July 25, the summit of Kilauea has been erupting over the past 24 hours. The Kilauea volcano is primarily monitored by The Hawaiian Volcano Observatory.

In 2018 also, Kilauea had a major eruption that displaced thousands of residents and destroyed more than 700 homes.