Support Us
More
More
HomeVIDEOSPOLITICALUS riots- Trump supporters has gathered outside the US Capitol Building before...
VIDEOSPOLITICALWORLD
January 7, 2021 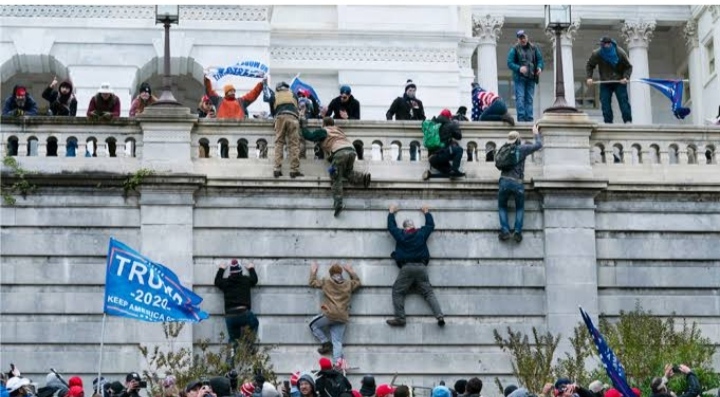 The process of counting and certifying the votes of the electoral college in the joint session of the US Parliament was started on Wednesday. The debate was going on in the House for this. Meanwhile, a group of supporters of Donald Trump suddenly reached inside the Capital Building.

They held violent demonstrations there and because of this, the debate had to be stopped midway. Actually Trump supporters were demanding that the election be canceled. During this type of demonstration, he also got into a clash with the police. It has come to light that during this period a fire fighting device exploded and a woman was shot, whose death has been confirmed. When the situation got out of control, the National Guard was sent to the Capitol Building.

Today is the dark day of American democracy. There have been reports of four deaths in Parliament during the uproar. Earlier, there was news of a woman’s death in the shootout.

The newly elected President Biden said that he is shocked and sad to see America in this darkness. Biden said in an address to the nation, ‘At this time, our democracy is under unprecedented attack. Unlike everything we have seen in modern times. An attack on the Capitol meant an attack on the stronghold of independence. Public representatives and the Capitol Hill Police and public servants who work for our Republic were attacked. Sworn to protect them. ‘