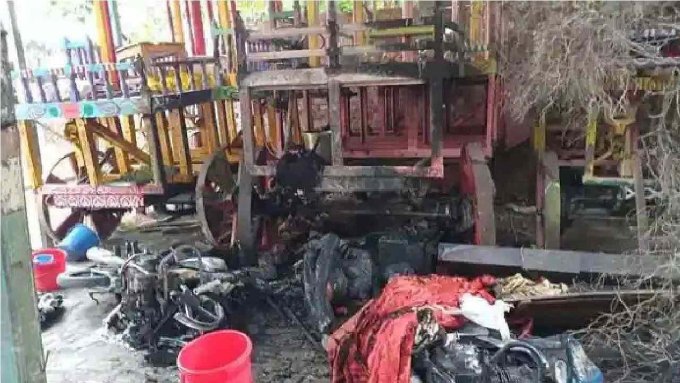 Temples have been targeted once again in Bangladesh. On Friday, a mob allegedly attacked the ISKCON temple in Noakhali district of the country. The ISKCON Community in Bangladesh informed about this and told that one of its members has also died. This attack comes at a time when Hindu temples were vandalized by some unidentified miscreants during Durga Puja celebrations in Bangladesh on Thursday. Since then the tension has built up.

The official Twitter handle of the ISKCON community tweeted, ‘It is with great sadness that we share the news of the death of ISKCON member Partha Das. He was brutally killed by a mob of 200 people yesterday. His body was found in a pond next to the temple. We demand the Government of Bangladesh (Govt of Bangladesh) to take immediate action in this regard.’

ISKCON said in another tweet, ‘ temple and devotees were attacked by a mob in Noakhali today. There was a lot of damage to the temple and the condition of one devotee remains critical. We request the Bangladesh government to ensure the safety of all Hindus and punish the perpetrators.’

The alleged attack on the temple comes after Bangladeshi Prime Minister Sheikh Hasina assured strict action after incidents of communal violence. He said that those who attacked Hindu temples in Bangladesh would be caught and punished. Following reports of attacks on Hindu temples, the Bangladesh government has beefed up security to facilitate Durga Puja celebrations in the country. Keeping in view the security situation, the authorities have deployed contingents of paramilitary forces and police across the country.

Local media said the situation remained critical in Chandpur, Cox’s Bazar, Bandarban, Sylhet, Chittagong and Ghazipur following the attacks and clashes. The Bangladesh government has assured better security to the Hindu community of the country. It has said that Border Guard Bangladesh (BGB) personnel have been deployed in 22 districts to maintain security. BGB operations director Lt Col Faizur Rahman said, “On the request of deputy commissioners and under the directions of the home ministry, BGB personnel have been deployed to ensure security during Durga Puja.”