More
Home WORLD Jeff Bezos and his brother to fly to space next month
WORLD
June 7, 2021

Jeff Bezos and his brother to fly to space next month 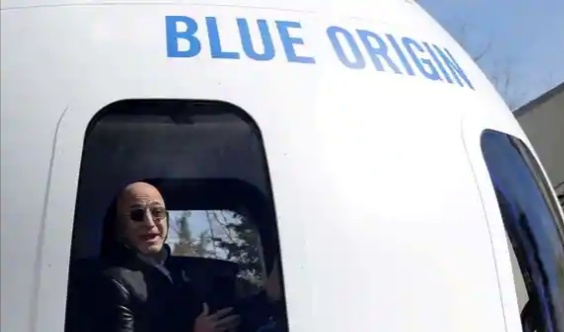 Jeff Bezos has announced that he will be flying to space next month. The billionaire and his brother will be two of the passengers on his company’s first suborbital sightseeing trip on its spacecraft, New Shepard.

“Ever since I was five years old, I’ve dreamed of traveling to space. On July 20th, I will take that journey with my brother,” Bezos, who is one of the richest people in the world, said in an Instagram post.

Bezos, who is due to step down as Amazon’s chief on July 5, will join the winner of an auction for a seat on the first space flight from Blue Origin.

Blue Origin closed the first round of the auction last month and said it had received more than 5,200 bidders from 136 countries, without disclosing the highest bid from the round.

The price of tickets, Blue Origin mentioned that one one seat will be given to the winner of a month-long auction that’s currently in progress. Till Monday morning, the bidding had reached $2.8 million.

Tip will last a total of 10 minutes

The trip will last a total of 10 minutes, four of which passengers will spend above the Karman line that marks the recognized boundary between Earth’s atmosphere and space.

After lift-off, the capsule separates from its booster, then spends four minutes at an altitude exceeding 60 miles (100 kilometers), during which time those on board experience weightlessness and can observe the curvature of Earth from space.

The firm, Blue Origin, was founded by Jeff Bezos in 2000 and it had conducted over a dozen test flights with no one on board at Blue Origin’s facilities in rural Texas.

Landmark for company that is competing with other aerospace firms

Blue Origin’s first human flight will be a major landmark for the company that is competing with other aerospace firms such as Elon Musk’s SpaceX and Richard Branson’s Virgin Galactic in the commercial space industry.