More
Home TECH Out-of-control Chinese rocket is falling back to Earth know where and when...
TECHVIDEOSVIRAL
May 6, 2021 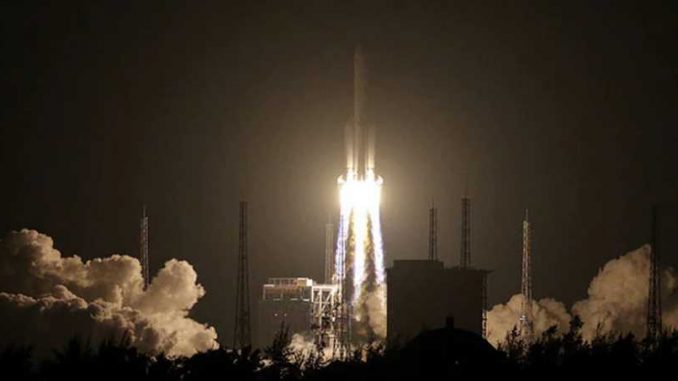 The world is facing deadly Corona virus because of China.

Whole world turned into a pile of corpses on sight. Even after this, China has not accepted it fault and how it spread the virus in the world?

Now a rocket launched by China can cause havoc. China launched the Long March rocket in space on 29 April

Now experts say that China has lost its control over their rocket. This rocket has broken through out of control and large pieces of it are falling down from the sky. These pieces can create havoc by falling down in many countries on the earth.

China had planned that through this rocket a Chinese space station named Tiangong will be built in space, which will be completed by 2022.

After this, this space station will circulate the earth and give information about the earth from space. But now the news is that this rocket has lost its control and its debris can cause havoc by falling on many countries. According to experts, China is also aware of this, but so far it has not issued any warning about it.

Experts say that China’s 100-foot long rocket is falling below the speed of four miles per second. Its pieces can fall anywhere. It may be that it falls on a heavily populated place. Or it may be that it falls on some empty space. Experts are constantly monitoring this. China launched Long March 5B on 29 April. Through this, China wanted to build a new space station in space.

Experts say that this huge part of the Chinese rocket will burn in the earth’s atmosphere but its debris can fall anywhere on the earth. This is not the first time that China’s rocket has been uncontrolled in space.

Earlier in May 2020, the main part of the Launch March 5B rocket became uncontrolled and its debris fell over the Atlantic Ocean.

NASA described the Chinese rocket accident as truly dangerous. The rocket passed over the Los Angeles and New York cities of the United States before it fell.

According to the route of this rocket at this time, it will fall around New York, Madrid and Beijing, located in the northern hemisphere of the Earth. Or it may fall around Wellington, the capital of southern Chile and New Zealand, located in the Southern Hemisphere. That is, these parts of the earth are threatened by uncontrolled rockets of China.

Radars from different countries on the ground are keeping an eye on this rocket. So that if it comes over a country, then information should be given to the people beforehand. Due to its speed and constantly changing altitude, it is difficult to know when, on what day and where it will fall on the earth.

By the way, most of its part will burn up as soon as it enters the atmosphere of the Earth. But even if a small part falls in the populated area, it will create havoc .

Carring three astronauts on Thursday, China launched a spacecraft to part of a space station still under construction for the longest stay...
Read more
BUSINESS

The delay in complying with India's new IT rules was heavy on Twitter. The government has terminated the status of the company's...
Read more
WORLD

The Benjamin Netanyahu era has come to an end in Israel. Naftali Bennett has been appointed as the new Prime Minister of...
Read more