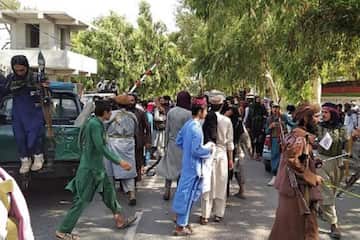 The Taliban on Tuesday announced an ‘interim’ government, nearly three weeks after taking over Afghanistan. Mullah Mohammad Hassan Akhund will be the head of this government. At the same time, Abdul Ghani Baradar has been made deputy.

Mullah Hassan currently heads the Taliban’s powerful decision-making body, the Rahbari Shura, or Leadership Council, which acts as a government cabinet on all matters of the group, subject to the approval of the top leader. Many important positions in the government have been given to top Taliban leaders. Chief spokesperson Zabihullah Mujahid has given this information in a press conference.

http://Mehbooba Mufti claimed that she has been placed under house arrest

While holding a press conference at the Government Information and Media Center in Kabul, Mujahid said that this cabinet is not complete, it is still an executive. We will try to take people from other parts of the country as well.

The Taliban had occupied Afghanistan about three weeks ago, after which US forces had left the country by August 31. After which it was being speculated that the Taliban would soon announce the formation of the government. But got postponed many times.