Support Us
More
More
HomeWORLDThe whole world is aware of the handiwork of Pakistan's support and...
WORLD
September 25, 2021 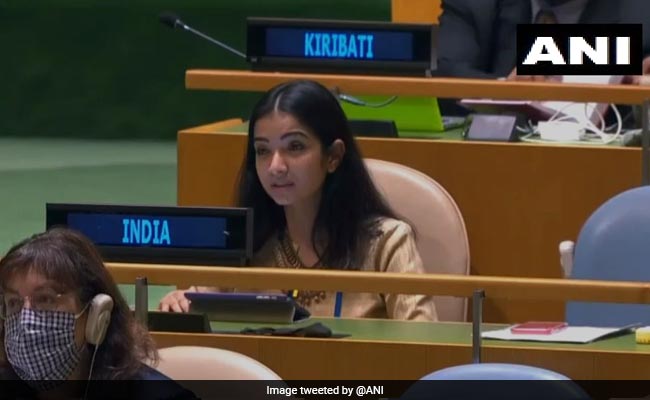 Pakistan is not deterring from raising the rage of Kashmir issue in international forums. In the annual session of the United Nations General Assembly (UNGA), this time the Prime Minister of Pakistan Imran Khan made the same claim and mentioned the formation of Jammu and Kashmir (Jammu-Kashmir) as a union territory. However, India has given a befitting reply to the allegations of Pakistani Prime Minister Imran Khan, using its right to reply in the United Nations. India said that the whole world knows and believes that Pakistan has been providing support and weapons to terrorists. Prime Minister Narendra Modi is also going to address the United Nations General Assembly and in his address also a strong advice can be given to Pakistan.

India’s First Secretary at the United Nations Sneha Dubey said that it is regrettable that this is not the first time that the leader of Pakistan has misused the international forum of the UN for false and disinformation, so that the world To divert attention from the poor condition of their country. Where terrorists roam freely. Whereas the condition of common man especially minorities is pathetic.

Dubey said, the UN member states know that Pakistan has a long history of providing support, shelter and protection to terrorists. This is a country that is known all over the world for training, funding and providing weapons to terrorists. Support to terrorism is their country’s sponsored policy. All the terrorists banned by the United Nations Security Council have been finding refuge in Pakistan.

Imran Khan gave his speech in the UN (United Nations General Assembly) through digital medium from Pakistan and raised the Kashmir issue. Khan said that Pakistan wants peace with India. However, reiterated that lasting peace in South Asia will come only when the Jammu and Kashmir dispute is resolved. Khan said it is the responsibility of India to create a conducive environment for a productive and fruitful dialogue with Pakistan.

Seeking support for the Taliban government, Imran Khan said, the unstable Afghanistan will once again become a haven for international terrorists. Therefore, the global community should cooperate to stabilize and strengthen the war-ravaged Afghanistan. Khan cautioned that the humanitarian crisis in Afghanistan is standing on its side and it will affect not only the neighboring countries of Afghanistan but the whole world. Pakistan has been accused of supporting the Taliban directly and behind the scenes.

Imran said, if we ignore Afghanistan now, then by next year 90 percent of the people of that country will go below the poverty line. According to Khan, the leaders of America and Europe hold Pakistan responsible for the current situation in Afghanistan, but after 9/11 in the war against terrorism, if anyone has suffered the most after Afghanistan, it is Pakistan.