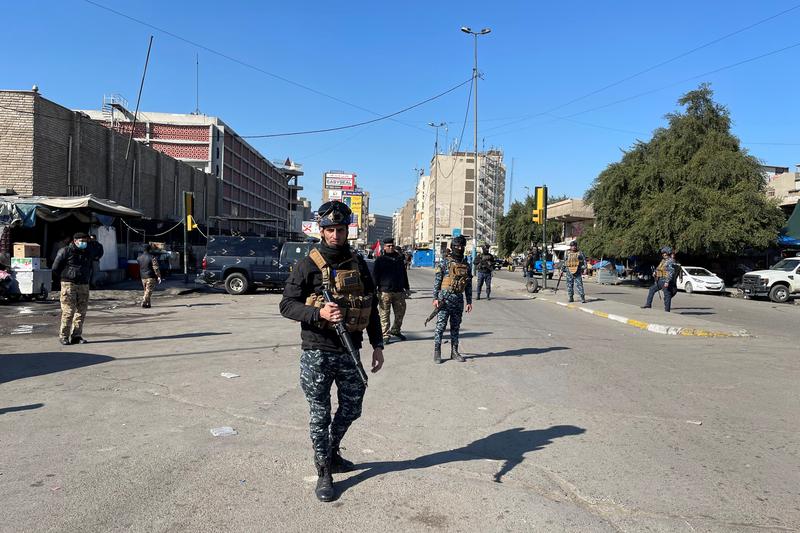 Two men blew themselves up in a crowded Baghdad market on Thursday, killing at least 32 people in Iraq’s first big suicide bombing for three years, authorities said, describing it as a possible sign of the reactivation of Islamic State.

amid heightened political tensions over planned early elections and a severe economic crisis. Blood smeared the floors of the busy market amid piles of clothes and shoes as survivors took stock of the disarray in the aftermath.

No one immediately took responsibility for the attack.

CCTV videos circulated on social media show the moment of the first blast and people fleeing through stalls or carrying at least one person who seems to be injured.

An eyewitness, Husain Abdallah, told AFP news agency the bomber had just got off a bus.

After the blast Mr Abdallah and others began running and were still trying to escape when the second bomb went off.

Iraq’s military said at least 28 people were killed and 73 wounded in the attack and said some of the injured were in serious condition. Hospital and police officials said the death toll was actually much higher, with at least 27 dead and more than 60 wounded. They spoke on condition of anonymity because they were not authorized to brief the media.

Meanwhile, Iraq’s Health Ministry announced all of its hospitals in the capital were mobilized to treat the wounded.

The attack occurred as security forces pursued two suicide bombers who detonated their explosives in the market near Tayaran Square, according to military spokesman Yahya Rasool.