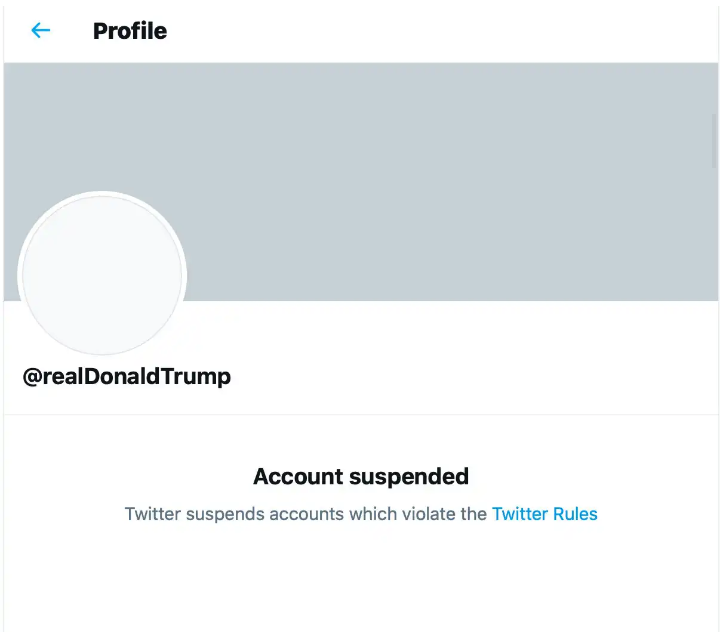 “In the context of horrific events this week, we made it clear on Wednesday that additional violations of the Twitter Rules would potentially result in this very course of action,” Twitter wrote. “… We made it clear going back years that these accounts are not above our rules and cannot use Twitter to incite violence.”

Twitter, which had locked Trump out of his account Wednesday for inflammatory posts after a pro-Trump mob stormed the Capitol, lifted the suspension the following day.

Late Thursday, Trump posted a short video in which he pledged to support a peaceful transition of power.

Twitter’s decision followed two tweets by Trump Friday afternoon that would end up being his last. The tweets violated the company’s policy against glorification of violence, Twitter said, and “these two Tweets must be read in the context of broader events in the country and the ways in which the President’s statements can be mobilized by different audiences, including to incite violence, as well as in the context of the pattern of behavior from this account in recent weeks.”

“The 75,000,000 great American Patriots who voted for me, AMERICA FIRST, and MAKE AMERICA GREAT AGAIN, will have a GIANT VOICE long into the future. They will not be disrespected or treated unfairly in any way, shape or form!!!”

The second indicated Trump did not plan to attend Joe Biden’s inauguration.

“To all of those who have asked, I will not be going to the Inauguration on January 20th.”

Twitter said the tweet concerning inauguration could be viewed as a further statement that the election was not legitimate. It also said that the tweet could be interpreted as Trump saying that the inauguration would be a “safe” target for violence because he would not be attending.

Meanwhile, the Alphabet Workers Union (AWU) is calling on YouTube to permanently ban President Trump following a raid on the US Capitol on January 6th. The move shows the newly formed organization, comprised of employees and contractors at Google’s parent company, is dead set on influencing issues that go well beyond workers’ rights.

The decision marked a dramatic departure from Twitter’s prior approach to Trump. And in considering how his supporters might read and interpret his messages, it potentially opened the door for the company to take a more aggressive approach on other content, including tweets from political leaders, in the future, experts said.