US: 10 dead in shooting at Colorado grocery store: Cops 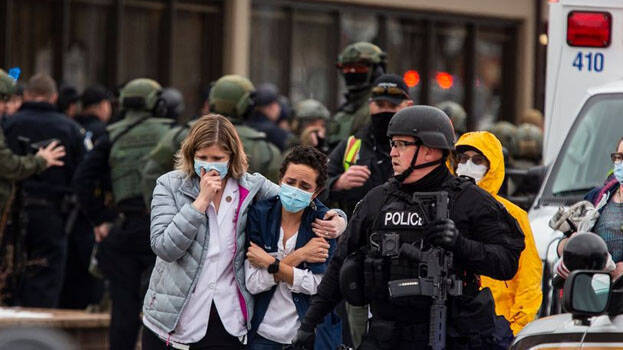 A shooting at a Colorado supermarket killed 10 people on Monday, including a police officer, and a suspect was in custody, authorities said.

The suspect was getting medical treatment and there was no further threat to the public, authorities said.

Videos showed a handcuffed man being escorted from the building by officers, shirtless and with his right leg appearing to be covered in blood.

People inside the grocery, King Soopers, described a harrowing and chaotic scene inside the store.

The authorities identified the officer who died as Eric Talley, a 51-year-old who joined the department in 2010. Officer Talley was the first to respond to the scene when reports of a gunman came in, the police said.

A Boulder Community Health spokesman, Rich Sheehan, said one person taken by ambulance to the hospital from the supermarket was undergoing medical treatment, but Sheehan declined to describe the nature of injuries or the patient’s condition.

Witnesses described scenes of pandemonium as they heard gunfire ring out inside the supermarket.

Kevin Daly, owner of Under the Sun Eatery and Pizzeria Restaurant a block or so from the supermarket, said he was in his shop when he saw police cars arriving and shoppers running from the grocery store. He said he took in several people to keep them warm, and others boarded a bus provided by Boulder police and were taken away.