Onion Price: There has been a huge fall in the prices of onions 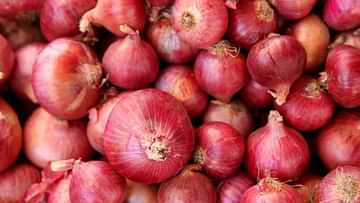 Onion Price: The price of onion in the retail market is 50 to 60 rupees per kg, but do you know how much money the farmers are getting? Most of the farmers are forced to sell onions at the rate of Rs 900 to 1900 per quintal. The real profit is being taken by middlemen and retailers. This rate to the farmers is from Maharashtra, which is the largest onion producer in the country. In Lasalgaon, Asia’s largest onion market, the minimum price of onion came to just Rs 901 per quintal on 16 November. While the model price stood at Rs 1880 per quintal.

On November 16, the minimum price of red onion in Lasalgaon mandi was only Rs 600 per quintal.

Bharat Dighole, founder president of Maharashtra Kanda Producer Organization, told media that most people sell at the lowest rate and model price. Therefore, to know how much the farmer is getting, one should see the minimum and model price.

Dighole says that the cost of onion per quintal is coming to Rs 17-18. Because the cost of diesel, fertilizer and labor has increased. In such a situation, we should get a rate of at least 32 to 35 rupees per kg. Otherwise, at the rate of 9 and 18 rupees per kg, the income of the farmers cannot be doubled.

Maharashtra produces 40 percent of the country’s onion. While talking about inside Maharashtra, Nashik is its stronghold. Dighole says that the farmers decide the rate of onions by the traders. The picture will change on the day the farmer himself starts fixing the price of his produce. We want the government to make such a policy so that farmers are not forced to sell onions for less than Rs 30 a kg. If this is done, then the income of the farmers will be doubled.

Onion producing farmers say that even at such a low rate, their cost will not come out. Because the price of diesel has increased tremendously. The cost of farm preparation has increased. The wages of those working in the fields have also increased. All the profits of our hard work are being consumed by middlemen and retailers.