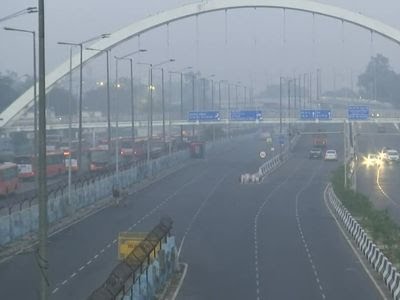 There is haze in Delhi on Thursday due to very poor air quality. According to the System of Air Quality and Weather Forecasting and Research (SAFAR), Delhi’s Air Quality Index (AQI) has been recorded in the very poor category at 337 today.

According to the agency, there is a possibility of light rain or showers on Thursday. The AQI will be in the very poor category for the next two days. Wind speed will increase on December 17. After this the AQI is likely to decrease.

According to Mahesh Palawat, Chief Meteorologist, Skymet Weather, the air quality index is expected to be in the very poor category due to low wind speed. At the same time, due to the wind coming from the mountain areas where there has been snowfall, the minimum temperature will again touch 6 degree Celsius in the next two days. There will be fog in the morning and the weather will be clear when the sun comes out during the day.

The mercury dropped to 7.8 degrees Celsius in Delhi on Wednesday, while the maximum temperature was 22.5 degrees Celsius. According to the Meteorological Department, the minimum temperature was one degree below normal. The Meteorological Office has forecast partly cloudy sky and drizzle in the evening due to a western disturbance in Delhi and adjoining areas from Thursday.