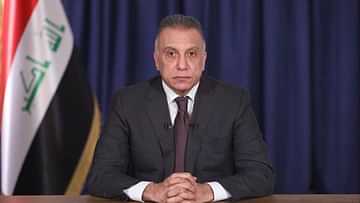 In Iraq, a drone laden with explosives targeted Prime Minister Mustafa al-Kadhimi’s residence in Baghdad in the early hours of Sunday. However, it was a matter of relief that Prime Minister Kadimi narrowly escaped this attack. Security sources said that several bodyguards of Kadimi were injured in this drone attack. The Iraqi army has called the attack on Prime Minister Mustafa an attempt to assassinate as part of a conspiracy. He informed that Kadimi survived the drone attack and did not suffer any serious injuries.

Prime Minister Mustafa al-Kadhimi said in a recorded television message that he was not harmed in the attack and that he was fine. However, more than 6 people have been injured in this incident. Prime Minister Al-Kadhimi tweeted, ‘The rockets of treason will not shake the determination of the brave security forces.’ He wrote, ‘I am well and among my people. Thank God.’ PM al-Kadhimi has been moved to a safe place. He called on the people of Iraq to maintain peace and exercise restraint. Not only this, the PM supported the security forces to ensure the security of the nation and uphold the law.

The Prime Minister’s residence comes within the Green Zone of the city. An Iraqi military statement said the attack targeted Kadimi’s residence. Two government officials said a drone had struck Kadimi’s residence, although the prime minister was safe. Security sources told Reuters that at least six members of Kadimi’s personal security force stationed outside the PM’s residence were injured.

The United States of America condemned the drone attack on Iraqi PM Mustafa al-Kadhimi. “We are relieved to learn that Prime Minister Mustafa was not harmed in this attack,” State Department spokesman Ned Price said. This is an act of terrorism, which we strongly condemn”We continue to remain in close contact with Iraqi security forces to maintain Iraq’s sovereignty and independence,” he said. They (Iraqi security forces) have offered our help in the investigation of this attack.