Meeting of BJP’s national executive is going on in Delhi 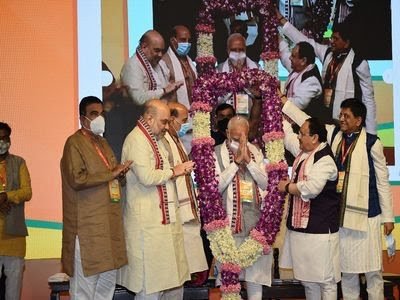 Important meeting of BJP’s national executive is going on in Delhi today. Organized after almost two years, this meeting is being held at the NDMC center which has started from 10 am and will go on till 4 pm. In the meeting, the leadership of PM Modi was praised for successfully fighting the battle of Corona. PM Modi honored by BJP Presidents for achieving 100 crore COVID 19 vaccination target. In the meeting, the assembly elections to be held in five states next year will be discussed and in the meeting of the National Executive, PM Narendra Modi will give the mantra of victory to the workers. In view of the upcoming assembly elections, this meeting of BJP is very important because elections are to be held in UP, Uttarakhand, Manipur, Goa and Punjab. BJP is in government in 4 of these states.

The venue is littered with BJP flags and posters of other leaders including Prime Minister Modi and Nadda. In some such posters, Modi has been described as a ‘Vishwa Priye’ leader. At the main entrance of the venue, Modi has a life-size picture of Nadda on one side and Nadda on the other side and it has been mentioned there that ‘Nation first, always first, history is being created by people’s power’. The leaders attending the program have to go through other procedures to prevent Covid including temperature checks. All the leaders who attended the program were welcomed by the Delhi Pradesh BJP with drums and slogans. During this, some women were seen singing traditional songs related to Chhath along with the content of Chhath Puja.

124 members of the National Working Committee, including BJP President Nadda, personally attended this first face-to-face meeting after the corona epidemic, while state units led by the Chief Minister and state presidents in 36 states and union territories through digital medium.

In the meeting, apart from senior party leaders Murli Manohar Joshi and LK Advani, many leaders are participating through virtual medium. The meeting started with the address of party president JP Nadda.