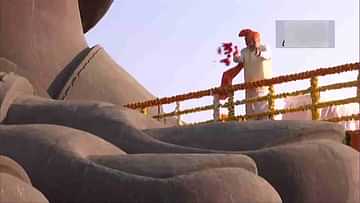 Union Home Minister Amit Shah paid floral tributes at the Statue of Unity in Kevadia on the birth anniversary of Sardar Vallabhbhai Patel. Home Minister Amit Shah is present as the chief guest at the ‘National Unity Day’ celebrations today. According to the information, Prime Minister Narendra Modi will also address this function through a recorded video message.

The Statue of Unity was unveiled in 2018. This statue of Sardar Patel is 182 meters high and it is the tallest statue in the world. Modi attended all three events till 2020, but this year he will not be able to attend as he is in Italy to attend the G20 summit.

Union Home Minister Amit Shah said that today is the birth anniversary of Sardar Patel. I want to tell the crores of countrymen all over the country- ‘Anytime only one Sardar can become a Sardar in centuries, that one Sardar keeps lit for centuries’. During this, he said that Harivansh Rai Bachchan ji had written a poem for Sardar Saheb – Patel is the watchdog of the country, Patel is the fearless tongue of the country. He told that there was no hesitation in keeping any matter in an impeccable manner, so today when Mother India is seeing the unbroken form, it is only and only the result of Sardar ji’s karma.

When there was a change in the country in 2014, the government was formed under the leadership of Modi ji, then it was decided to celebrate 31 October as National Unity Day. This was done because the struggle that Sardar Patel fought for independence for years continues to inspire the younger generation of the country. He said that Kevadiya is not the name of any place, it has become a place of pilgrimage. A pilgrimage place of unity of the nation, a pilgrimage site of patriotism and today this sky-touching Statue of Unity is giving a message to the whole world that India’s future is bright.

An official of the Statue of Unity Authority said Shah will lay wreaths at the statue early in the day and then take the salute of a parade in which paramilitary forces and Gujarat Police personnel will take part. 75 cyclists from ITBP, SSB, CISF, CRPF and BSF and 101 motorcyclists from police forces of Tripura, Tamil Nadu, Jammu and Kashmir, Gujarat will also participate in the parade.

Cycling personnel have covered about 9,000 kms while motorcyclists have covered a distance of 9,200 kms from different parts of the country. 23 medal winners from Olympic, Asian and Commonwealth Games will also participate in it, the statement said. There will be a joint band of ITBP and Gujarat Police in the parade. In 2014, the government had decided to celebrate Sardar Patel’s birth anniversary on October 31 as ‘National Unity Day’.