Rajasthan Cabinet Reshuffle: Pilot expressed happiness over the change in the cabinet, said – there is no faction in our party 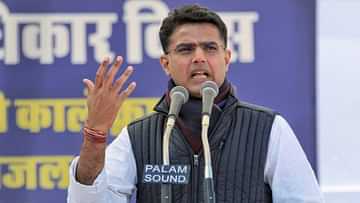 In Rajasthan, finally today the cabinet of Chief Minister Ashok Gehlot is going to be expanded. Earlier on Sunday, Sachin Pilot said that, after much discussion and deliberation, the step taken by the leadership is sending a good message. Glad that what is lacking has been filled. 4 Dalit faces have been given a place. People from Dalit community have been given a large number of places in our government.

Sachin Pilot expressed happiness over the change in the cabinet and said that there is no faction in our party.

Pilot said that there is no such thing as factionalism in the party. This morning I was reading newspapers so many ministers from this group, so many ministers from this group… He made it clear that there is no faction in our party. On the question of Amit Malviya, Pilot said that the matter of UP was to give tickets. Here 1 to 3 places have been given in the cabinet.

The impression of Priyanka Gandhi is being seen in the cabinet. Three women have been made ministers. Sachin Pilot said that he has brought forward the thinking of Congress General Secretary Priyanka Gandhi and according to this thinking, three women have been given a place in the cabinet in our cabinet. Ministers have also been made from Pilot thanked the Congress high command and the Chief Minister of Rajasthan for the cabinet expansion.

The much-awaited reshuffle in the cabinet of Rajasthan Chief Minister Ashok Gehlot is going to take place on Sunday, under which 15 MLAs will be sworn in as ministers. The swearing-in ceremony will be held at 4 pm on Sunday in which 11 MLAs will be sworn in as cabinet ministers and four as ministers of state. The Congress government in the state is going to complete three years of its term next month and this is the first reshuffle in the cabinet which is being seen as an attempt by the party high command to balance the regional and caste as well as the former deputy chief minister Sachin Pilot camp.