Arunachal Pradesh: China has built a new village in India in two years 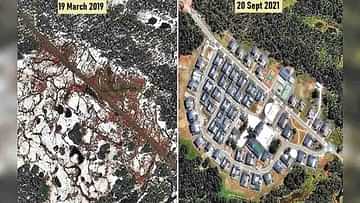 India has never accepted such illegal occupation of its territory, nor does it accept China’s irrational claims. This second enclave is within about six kilometers of India, and is in the area, which is between the Line of Actual Control (LAC) and the International Border. India has always claimed its own territory. It is not clear from the pictures whether people are settled in the enclave.

The first village was a 100-house built last year on the banks of the Tsari Chu river in Upper Subansiri district, 93 km west of the second enclave. The existence of the new enclave, the second of its kind, is proved by photographs from two of the world’s leading satellite imagery providers – Maxar Technologies and Planet Labs. Not only do dozens of buildings are visible in these pictures of Shi-Yomi district of Arunachal Pradesh, but a Chinese flag is also seen painted on the roof of a building, which is so big in size that satellite images can be seen. Through this huge flag, China is seen presenting its claim on this area.

The exact location of the new enclave is clearly shown by Bharatmaps, an online map service of the Government of India. This digital map of India, which is carefully prepared under the supervision of the Surveyor General of India, also confirms that this location is within the Indian border.

According to Sim Tac, chief military analyst working for the Europe-based Force Analysis, which analyzes military conflicts and defense policy and provides data, “data from the Geographic Information System (GIS), taken from the official website of the Survey of India”. Location of this village on the basis of Gaya.The condition comes in Indian territory.It seems to be such a location, where due to local geographical conditions, it will be easier for China to reach this valley than India.