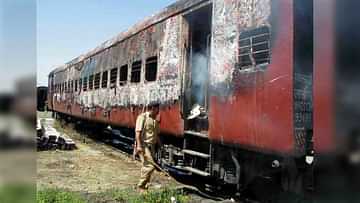 Haji Bilal, a convict in the 2002 train bogie set on fire in Gujarat’s Godhra city, died during treatment at a hospital. Giving information on Saturday, an officer said that the convict Ismail Abdul Majeed alias Haji Bilal (61) was serving life imprisonment in the Central Jail of Vadodara.

Vadodara Assistant Commissioner of Police Alpesh Rajgor said that on November 22, suddenly, Bilal health deteriorated. He was admitted to Sayaji Hospital in Vadodara. He was put on oxygen support due to shortness of breath. He died during treatment on Friday night. On information, the police took necessary legal action and handed over the body of Haji Bilal to his relatives after the post-mortem. His body was taken to Godhra, where he was buried.

Also Read – Opportunity to buy cheap gold from November 29, know how much money will have to be paid

On February 27, 2002, the S-6 coach of the Sabarmati Express train carrying kar sevaks returning from Ayodhya to Gujarat was set on fire. Due to this fire, 59 passengers in the bogie were killed. After this, large scale riots spread in Gujarat. A Special Investigation Team was formed to investigate the Godhra incident.