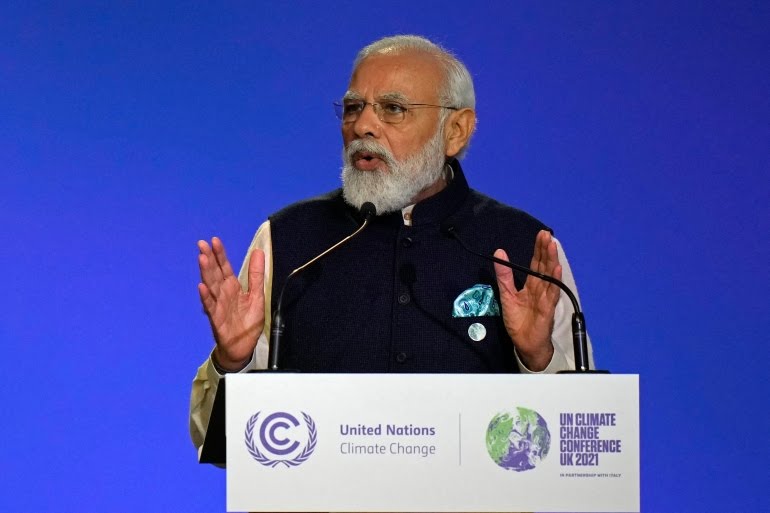 ndia will reach carbon neutrality by 2070, Prime Minister Narendra Modi announced as part of a five-point action plan that included reducing emissions to 50% by 2030, making the boldest pledge on Monday at the COP26 climate summit in Glasgow, where he also urged developed countries to deliver on their promise of climate financing.

The announcement injected new life into talks that had been set back by a disappointing outcome from the Group of 20 meeting in Rome this weekend. Though India’s goal is two decades behind rich nations such as the U.S. and U.K., it’s compatible with what scientists say is needed to avoid catastrophic global warming.

“This was a very significant moment for the summit,” said Nicholas Stern, chairman of the Grantham Research Institute on Climate Change and the Environment at the London School of Economics. It’s a chance for India to show that “it can deliver on both economic development and climate change.”

Modi also announced that the carbon intensity of India’s economy – the amount of goods produced per unit of energy – would be reduced by 45 percent by 2030. The previous goal was 35 percent.

Scientists have said the world needs to halve global emissions by 2030 and reach net zero by 2050 to avoid the worst effects of climate change.

A COP official welcomed the 2030 pledge but expressed surprise at the 2070 goal, which is beyond China’s net zero target of 2060. The official, who spoke on condition of anonymity, said there was hope India might bring 2070 forward.