Stone Pelting On Police In Kanpur After Friday Prayer 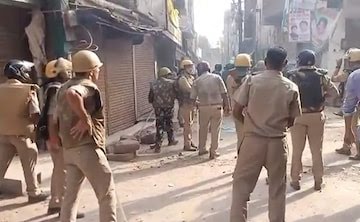 Two persons were injured in a violence that broke out at Yatimkhana Chauraha in Kanpur after two groups clashed over the issue of market bandh. A bandh was called by a group over remarks made by BJP leader Nupur Sharma.

As violence broke out, the police reached the spot to control the situation. However, they too were attacked with stones. Heavy stone pelting was reported, leading to riot-like situation in the city.

At least three cases have been filed against Bharatiya Janata Party (BJP) spokesperson Nupur Sharma for her alleged comments against Prophet Mohammed during a recent news debate on the Gyanvapi issue.

Kanpur’s Police Commissioner Vijay Singh Meena has said the situation is now under control and about 15 people have so far been detained over the clashes. He refuted rumours that gunfire was heard and petrol bombs were also used during the clashes.

Also Read: Babar Azam wants to become No.1 batter in all formats, Karthik pitches in

Muslims have been protesting and demanding action against BJP spokesperson Nupur Sharma for some of her comments which have hurt their religious sentiments.

So far, three FIRs have been filed against the BJP leader for allegedly making objectionable remarks against Prophet Muhammad. Two cases have been registered in Maharashtra and one in Hyderabad of Telangana. The first case was registered in Mumbai and the second in Pune. The second case was filed on a complaint by a Nationalist Congress Party (NCP) leader.