Taliban fighters have not received money in months: Reports 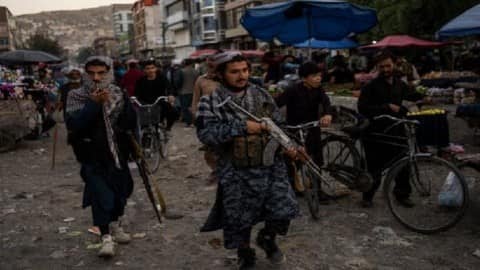 Afghanistan has been in a cash crisis since the Taliban took power, as global financial aid to the country has been frozen. The Taliban, which is facing difficulties, has also set a limit for the general public to withdraw money from the bank. However, now the Taliban themselves do not even have enough money to give to their fighters. According to a storey in the New York Post, most Taliban fighters have not received money in months.

Most of the countries have also refused to recognize the Talibani government, after which the shortage of money in the country has increased further. Foreign aid was frozen and loans from the International Monetary Fund and the World Bank were halted following the Taliban’s takeover.

The US also froze the assets of the Central Bank of Afghanistan, worth $ 9.4 billion. At the same time, the Financial Action Task Force (FATF) has also asked its 39 member countries to freeze Taliban assets.

Afghanistan’s economy has been deteriorating and prices have been skyrocketing as a result of this predicament. The United Nations warned last week that 97 percent of Afghanistan’s population may soon fall below the poverty line, up from 72 percent when the Taliban took control.

According to the New York Post, many Taliban fighters outside of major cities are surviving on very little food and sleeping in trucks or whatever acceptable shelter they can find. Local community members are also said to provide food and other supplies to Taliban members, according to the publication.

ALSO READ: Saudi Arabia says that we hope the Taliban will run a good government

Citizens who travel hundreds of miles to visit a city and then line for hours to acquire cash have already been subjected to a $200 withdrawal restriction imposed by the Taliban. Since the Taliban’s takeover, many banks have closed, and those that remain open only allow limited cash withdrawals.

Meanwhile, the UN said on Tuesday that four million Afghans are facing “a food emergency” and the majority live in rural areas where $36 million is urgently needed for the coming months to ensure the planting of winter wheat, feed for livestock, and cash assistance for vulnerable families, the elderly and disabled.

Rein Paulsen, director of the Food and Agriculture Organization’s Office of Emergencies and Resilience, told reporters that this emergency is characterised by “extreme gaps in food consumption, very high levels of acute malnutrition and excess mortality”.

On Monday, at UN meeting in Geneva, the international community pledged to provide over $1 billion in humanitarian assistance to the people of Afghanistan. Taliban government’s acting foreign minister Amir Khan Muttaqi thanked the global community for the help and said they want good bilateral relations with the world’s countries, including the United States.